An exciting set of results at the Centenary Match: Coventry & District continues to celebrate 100 years of local chess - this time with a match against the Leamington League!


Coventry, West Midlands / 24 Sept 2019 / -- The Coventry and District Chess League marks its 100th anniversary this year. After a successful Season and Centenary Tournament, the League continues to celebrate - this time, challenging the Leamington League (LDCL) for an inter-league match on the 18th September. 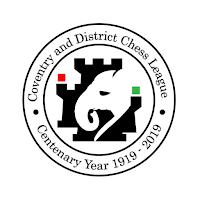 Spearheaded by, Chairman Colin Green leading the Coventry & District side, and Ben Graff (LDCL Chairman) leading the Leamington side - two teams of fourteen players each, came together to celebrate the occasion.

This eventful match was held at Sprinkles Gelato on Hales Street, who very generously provided an excellent venue for all the players - supporting local chess.

From Coventry & District, the players represented clubs of Coventry, the city's two universities (Coventry, and Warwick), and the surrounding towns of Nuneaton, Rugby, and Kenilworth - which has formed the backbone of this League for the last 100 years.

There were two rounds played - every player with 30 minutes each. Round 1 saw the Leamington League take a significant lead with 9-5. This was enough for Coventry & District to manage expectations about chances of winning. Never-the-less, the players came back in earnest for Round 2 - would there be a huge upset, or would Leamington prevail?

As win came after win, it was clear that every point mattered, as the Coventry side started to take a Round 2 lead. In a turn of events, the CDCL settled on 9-5, equalizing the scores, to bring the result to a complete tie. From blundering queens to back-rank mate, the games saw the full range of tactics on display!

Both Leagues thank all the players for competing, as well as, every player and local Club organiser for keeping local chess vibrant across Coventry & District, and last but not least, to Sprinkles Gelato for their generous support.


Chess, in general, includes Standardplay games lasting several hours, to considerably faster Rapidplay or Blitz games. Each year, the League offer a variety of chess for clubs and members to participate, from team events in the main league, to the shorter, Divisional Cup, Knock-Out Cup, and Plate tournaments, as well as, the Summer Cup for individuals to enter.

Demographics of local chess have changed over the century, since 1919. We have had many players from the city's (and nearby towns') workers' clubs, as well as local schools, to the newer clubs at Coventry University, and the University of Warwick.

Nationally, growing numbers of players with busy work lives, now engage with chess online, which our clubs cater for with an established online presence, as well as, some online events! So, whatever your interest and level, the League remains open to all.

Members of the public are more than welcome to get in touch, to play chess, or join the League's constituent clubs (details on the League website).

Clubs are always on the lookout for new players, no matter what your standard of play, there will be a place for you in the Coventry league.